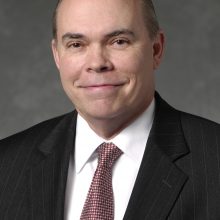 Olin Wethington is the Founder and Principal of Wethington International LLC, an investment and business advisory firm focused on advising institutions on capital investment, financial structure and business strategy in emerging markets.

Mr. Wethington is also the Executive Director of the Project on Shaping the Asia-Pacific Future at the Atlantic Council’s Scowcroft Center for Strategy and Security, as well as a Senior Fellow of the Center.

He previously served as Chairman, AIG Companies in China, and was a partner at Steptoe & Johnson (Washington, DC).

Mr. Wethington has also held various positions in the U.S. government, including Special Envoy on China; Counselor to the Secretary of the U.S. Treasury; Assistant Secretary for International Affairs, U.S. Treasury; and Special Assistant to the President and Executive Secretary, Economic Policy Council, White House (under President George H.W. Bush).

He is a graduate of Harvard Law School and the University of Pennsylvania. He is a Member of the Council on Foreign Relations, the Board of Trustees of the George C. Marshall Foundation and of Freedom House, and the Board of Directors of the International Republican Institute. He is a recipient of the Alexander Hamilton Award, the highest honor of the U.S. Department of the Treasury.