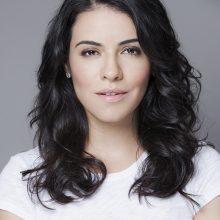 Olga is a Mexican actress, producer and activist based in the United States. Her most recent project as a producer is the American film “Waiting for the Barbarians”, based on the novel written by the winner of the Nobel Prize for Literature, J.M. Coetzee. The film, which premiered in September 2019 at the Venice International Film Festival, is directed by Oscar-nominated Colombian director Ciro Guerra with actors Mark Rylance, Gana Bayarsaikhan, Johnny Depp and Robert Pattinson.

Olga is the founder of “Decididas,” a digital content series and platform that empowers women in Mexico and Latin America by creating awareness of the decisions they make every day in order to generate positive changes in society. www.somosdecididas.com

In September 2017, together with fellow actresses Karla Souza, Ana de la Reguera and Kate del Castillo, Olga founded the organization “Los Angeles in Mexico” which is dedicated to helping the victims of the 2017 earthquake as well as supporting immigrants in the U.S.

She is a Founding member of Times Up, which focuses on securing gender equity and safety for women workers across industries. Olga’s voice and role in the TIMES UP movement has been significant. She has helped to create a bridge between Latin Americans in the entertainment industry, the Latinx community and other individuals in the entertainment industry to help create solidarity and to ensure that workers in lower-paid industries remain centered. In this capacity, she helped to activate Latin American actresses and many others to support immigrant families, children, asylees and refugees in the wake of the immigration crisis in the spring of 2017. Olga has continued to advocate for the fair treatment of immigrants, asylees and refugees in Mexico, the US and around the world.

In addition to the projects that she has created, Olga has been a fierce supporter of farmworker women and domestic workers. In the spring of 2018, she joined Alianza Nacional de Campesinas and National Domestic Workers Alliance for a delegation to Washington, DC to demand that all work be safe work, including protection against workplace sexual violence, for all workers no matter the industry they are employed in.

In May 2019, Forbes magazine declared her one of the 100 most powerful women in Mexico.