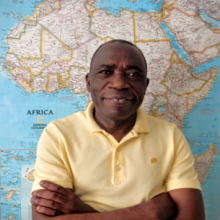 I’m Nzola Swasisa, and I was born and raised in the Democratic Republic of the Congo (DRC). Because of my passion for technology, at a young age I started taking electronics communications courses. Since then, I built an entire academic and working career in the field. For 19 years I worked for the Christian organization Mission Aviation Fellowship (MAF) in 6 different countries; DRC, Angola, Namibia, South Africa, Zambia and Mozambique.

While working at MAF, I became aware of the lack of telecommunication infrastructures in rural communities and I begun to refurbish old radio communications to help establish new communication systems.

In the late 90’s, I started implementing a radio email system which consisted of sending emails via radio waves. When cell phones then became popular in Africa, I decided to build an offline mobile email server.