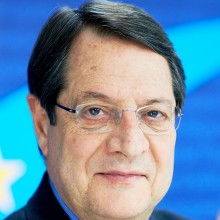 Nicos Anastasiades was born in Pera Pedi, Limassol, in 1946. Both his parents played an important role in his life, especially his father. He has a twin brother and a sister.

In 1971 he married Mrs Antri Moustakoudi and they had two daughters, Elsa and Ino. He has four grandchildren, Andys, Nicholas, Giorgos and Nicos.

During his student years he has been an active member of the Youth of Georgios Papandreou’s Centre Union in Athens.

After his studies he served in the National Guard, first at the Recruits’ Training Centre (KEN) in Larnaca and then at the 4th Higher Military Command.

Nicos Anastasiades is a founding member of the Youth of the Democratic Rally (NEDISY), in which he served from the posts of District Secretary, Vice President and President.

After his successful term in NEDISY he takes action next to the historical leader Glafkos Clerides from the positions of First Vice President and later Deputy President until 1997. He is a member of the Cyprus National Council since 1995.

Nicos Anastasiades was triumphantly elected as President of the Democratic Rally in 1997, a position that the members and officials of the party firmly trusted him with by being re-elected in 1999, 2003, 2007 and 2012.

In his political course, Nicos Anastasiades actively participates in the international political scene. From his position as Chairman of the Committee on Foreign Affairs, as Head of the Inter-Parliamentary Committee on Foreign Affairs as well as Head of the Cyprus delegation to the Inter-Parliamentary Union (IPU), he represents the Cyprus Parliament since 1991 and takes part in a number of international missions, specialized conferences and visits.

Nicos Anastasiades was elected President of the Republic of Cyprus on 24 February 2013 by winning the run-off presidential election with a majority of 57.4%.