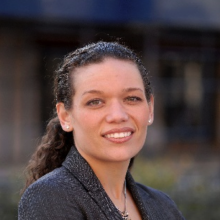 Nikki Cicerani became President & CEO of Upwardly Global in April 2009 after serving as founding Managing Director of the organization’s New York office. During her tenure as CEO, the organization expanded from two major metropolitan areas to five, launched online services, and elevated its mission from a local program to a national conversation around skilled immigrants’ value to the United States. Upwardly Global’s services now reach thousands of underserved immigrants and refugees across the country who are increasingly being recognized as a valued community asset at the city and state level.

Nikki is a founding member and serves on the steering committee of IMPRINT, a coalition of organizations working to promote and implement best practices in the integration of immigrant professionals. She has advised the White House Domestic Policy Council on the economic integration of foreign-trained professionals. She has also served as an expert panelist at national and international forums on migration, including the 2010 Cities of Migration Conference, the 2014 Global Great Lakes Conference, and the 2011 and 2013 Clinton Global Initiative meetings on the U.S. economic recovery.

Prior to joining Upwardly Global, Nikki worked in both the non-profit and for-profit sectors. She holds a M.B.A. from Columbia Business School, where she was President of Columbia Women in Business, and a B.A. in Policy Analysis from Cornell University. Nikki lives in Millburn, New Jersey with her husband and two children.