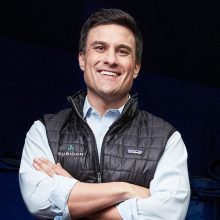 Nate Morris is leading a technology revolution in the waste and recycling sector and is rekindling hope that lasting change and progress can be achieved in the global environmental movement.

Morris is making his voice heard as a leading pioneer in the use of software to advance critical waste and recycling objectives and as an emerging thought leader on national security, American leadership, innovation, and conservation — all leveraging economic freedom.

Morris is a ninth-generation Kentuckian. His ancestors crossed the Cumberland Gap and settled a new frontier in central Appalachia, which has remained their home for more than two centuries. Morris’ forebearers worked in Kentucky’s coal mines, factories, and on its farms. Morris was born in Lexington and raised by a single mother and brought up in a working-class home. One of his early role models was his grandfather, a long-time union leader at the local Ford assembly plant.

Morris was president of his senior class in high school and earned a Scottish Rite scholarship to attend George Washington University. Throughout his years at George Washington, Morris carried a full course load and worked in government, serving senators, members of Congress, and the Department of Homeland Security in the White House. After graduation, Morris attended Princeton University’s School of Public and International Affairs. Morris is a member of Phi Beta Kappa and a Fulbright Specialist Scholar.

Not long after graduation, Morris set his sights on bringing change to one of the toughest industries in the world: waste and recycling. An industrial sector historically riddled with organized crime, it has remained essentially unchanged since the time of the Romans.

Morris founded Kentucky-based Rubicon, a software company driving innovation in the waste and recycling sector. Launched with maxed-out credit cards and a $10,000 line of credit, Rubicon is now valued at well in excess of $1 billion with operations in twenty-two countries on five continents. This proves that big ideas are not limited to the coasts—the American heartland can and will be set up to provide jobs and innovation for future generations.

Fast Company named Rubicon to its prestigious annual list of the World’s Most Innovative Companies. Morris’s leadership earned him recognition as a Young Global Leader by the World Economic Forum. He is also the youngest inductee ever to the Kentucky Entrepreneur Hall of Fame.

Hailed as «America’s Technology Company», Rubicon has ushered in a new industry standard that works to protect the United States against environmental and national security threats. Rubicon holds over 50 patents.

Morris founded the Morris Foundation to provide Kentuckians with access to the American Dream, economic freedom, and opportunity. He is a benefactor to the University of Kentucky, where he serves on the Dean’s Advisory Council and as Entrepreneur in Residence at the Gatton College of Business and Economics.

Morris is a Senior Advisor to the Scowcroft Center for Strategy and Security, a member of Business Executives for National Security (BENS), a member of Concordia’s Leadership Council and the Trilateral Commission.