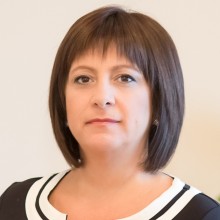 Natalie A. Jaresko was designated Executive Director of the Financial Oversight and Management Board for Puerto Rico on March 2017. She has a distinguished international career in public service and private industry, with over 25 years of successful management experience in government and business, where she effectively developed strategy, negotiated and implemented public policy and business objectives, especially during crisis periods.

As Minister of Finance of Ukraine (2014-16) she served at one of the most critical times in Ukraine’s history, rocked by a deep recession, foreign occupation, and war on part of its territory. During her tenure she led the successful negotiation and implementation of the largest IMF program in the institution’s history, as well as a complex sovereign and sovereign guaranteed debt restructuring. As a result of her government’s actions, Ukraine is seeing its first signs of recovery, including stabilization of the domestic currency, growth in banking system deposits, sharply reduced inflation, and growth in industrial production.

Prior to this ministerial position, she spent two decades investing in small and medium-sized business in the region, as co-founder and CEO of Horizon Capital, a fund manager with over $600 million under management, and as President and CEO of the Western NIS Enterprise Fund, creating a platform for private equity investment in the region.

She began her career in public service serving in the U.S. State Department in Washington, D.C. from 1989-92, and as Chief of the Economic Section of the U.S. Embassy in Ukraine from 1992-95, where she was responsible for building a new economic relationship between the United States and newly-independent Ukraine.

Ms. Jaresko is a Certified Public Accountant. She received her Master’s Degree in Public Policy from the Harvard University Kennedy School of Government, and her Bachelor of Science Degree in Accounting from DePaul University in Illinois.