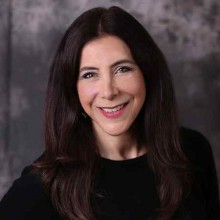 Nancy A. Aossey is President and CEO of International Medical Corps, a preeminent first responder delivering medical relief and training programs in areas hardest-hit by war, natural disaster, disease and displacement. Aossey joined International Medical Corps as its startup CEO, shortly after its founding in 1984. She scaled the organization from a handful of employees to more than 7,000 staff and thousands of volunteers today working on the frontlines of crises, including: wars in Syria, Iraq, Yemen, Libya, Afghanistan, and Pakistan; ongoing conflicts in Somalia and South Sudan; the earthquakes in Nepal, Haiti and Japan; and the Ebola outbreak in West Africa. She has transformed International Medical Corps into one of the largest humanitarian organizations delivering more than $2.2 billion in assistance, health services, and training to tens of millions of people in more than 70 countries.

Aossey serves on the Board of Directors of the Pacific Council on International Policy; Her Majesty Queen Rania Al-Abdullah’s Jordan River Foundation/USA; the Ronald Reagan UCLA Medical Center, and the Advisory Board of the RAND Center for Middle East Public Policy. Elected by her peers, Aossey served for three years as Chair of the Board of InterAction, the United States’ largest coalition of organizations working in international development, refugee assistance, and disaster relief. She is a member of the Council on Foreign Relations, the Young Presidents’ Organization, and the Chief Executives Organization. She has testified numerous times before Congress, briefed the White House, and is frequently interviewed by major media on humanitarian issues. Her awards include the Goldman Sachs 100 Most Intriguing Entrepreneurs; the Young Presidents’ Organization’s Global Humanitarian Award, as well as its Legacy Award; and the Los Angeles Business Journal’s Leadership Excellence Award and Non-Profit CEO of the Year Award. In recognition of her humanitarian contributions, she was awarded the UCSF Medal, and she also accepted the UC Berkeley Public Health Organizational Hero Award. A resident of Santa Monica, California, Aossey was born and raised in Cedar Rapids, Iowa, and holds a BA, an MBA, and an honorary doctorate from the University of Northern Iowa.