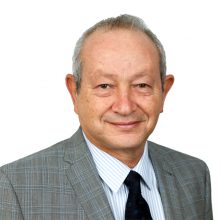 Mr. Sawiris is currently Executive Chairman of Orascom Investment Holding, a holding company investing in industries that are critical to shaping the future, including financial services, agri-industries, real estate development, logistics and transport.

He is Chairman of La Mancha, the private natural resource investment vehicle of the Sawiris family group with equity investments in Evolution Mining, Endeavour Mining and Golden Star Resources.

In 2015, the Sawiris family acquired a majority stake in Euronews where M. Sawiris is Chairman of the board.

He served and is serving on numerous boards, committees and councils including the International Advisory Committee to the New York Stock Exchange, London Stock Exchange Group’s Africa Advisory Group, the Boards of Trustees of Nile University, the French University in Egypt (UFE) and the Arab Thought Foundation.

Mr. Sawiris received numerous honorary degrees and civic honors, including France’s “Legion d’Honneur“, the Honor of Commander of the Order of the Star of Italian Solidarity and the prestigious “Sitara-e-Quaid-e-Azam” of Pakistan.