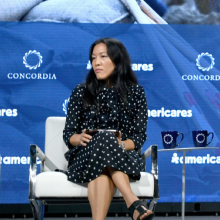 Since 2016, she has served as the Chief Executive Officer of CORE (Community Organized Relief Effort), formerly J/P HRO, Sean Penn’s disaster relief charity. During that time, she has overseen the successful transition from a Haiti-based recovery organization to an international response and resilience- building NGO, responding to crises in Puerto Rico, across the Caribbean, in Latin America, and the continental United States. In her current role, Ms. Lee provides vision and strategic leadership for a comprehensive array of programs including reforestation, sustainable agriculture, education and youth development, community health, women’s entrepreneurship, and extensive rebuilding and reconstruction efforts. Additionally, in 2018, she launched a pioneering disaster preparedness training program, targeting young people from low-income communities of color in the US “Hurricane Belt.” On behalf of CORE, she has led high-level partnership with public and private stakeholders such as The World Bank, the United Nations, the Sean Parker Foundation, the Supreme Committee of Qatar, the Leonardo DiCaprio Foundation, Salesforce, World Central Kitchen, and Airbnb.

Prior to joining CORE, Ms. Lee worked at the UN’s Organization for Coordination and Humanitarian Affairs (OCHA), serving as the lead on urban humanitarian response and as the private sector liaison for the Secretary General’s World Humanitarian Summit. Previously, she served as Country Director for CHF, where she was responsible for a $150MM portfolio of projects including emergency shelter, neighborhood planning, construction, debris removal, and livelihoods. She has extensive field-based experience, and has lived in Haiti, both before and after the 2010 earthquake; the Philippines, responding to Typhoon Haiyan; Kosovo, working to address the post-war refugee crisis; and the Congo, participating in humanitarian response efforts.

Lee is the author of “Livelihoods in Emergencies: A Double-Edged Sword.” She developed a gender-sensitive emergency assessment tool, called the CLARA, while with the Women’s Refugee Commission, which is now being used by international organizations around the world. She has presented on crisis response and recovery at leading conferences and high-level meetings, such as the Concordia Summit, the Clinton Global Initiative, the Harvard Humanitarian Summit, InterAction, and Chain X Change, one of the largest blockchain conferences in the world.

Ms. Lee holds a Masters in Urban Planning from New York University, and a Masters in Economics & Conflict Management from Johns Hopkins University School of Advanced International Studies (SAIS). She received the Society for International Development’s prestigious Truman Award, in May 2009.