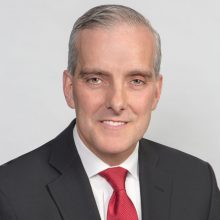 From February 2013 until January 20, 2017, McDonough served as White House Chief of Staff for President Obama. In that role, McDonough managed the four thousand member White House staff, as well as Cabinet Secretaries and agency leaders. He provided strategic advice to the President on the most significant domestic policy, national security, and management issues facing the federal government and enforced plans and accountability for performance and goals, maintaining the Obama Administration’s reputation for effective, ethical operation. He planned and coordinated efforts to recruit and retain key talent—including an unprecedented expansion of technology experts, engineers, and content generators within the White House and across the federal government.

Prior to his role as Chief of Staff, from September 2010 until February 2013, McDonough served as Assistant to the President and Principal Deputy National Security Advisor. He chaired the National Security Council’s Deputies Committee, leading a multiagency team to address complex national security challenges, including crisis management as well as policy decisions related to the Iran nuclear negotiations, strategic arms reductions talks with Russia, the United States re-balance to Asia, the Afghanistan surge, and the Iraq drawdown. Throughout the 2008 Presidential campaign, McDonough served as Senior Foreign Policy Advisor for Obama for America.

Prior to his eight-year tenure in the White House, McDonough served in senior leadership and policy-making positions in the U.S. House of Representatives, as Professional Staff Member on the International Relations Committee, and in the U.S. Senate, for the Senate Majority Leader and for Senator Ken Salazar (CO).

McDonough is currently Senior Principal at the Markle Foundation. In this role, he is working to address the skills gap, particularly in light of the looming artificial intelligence revolution. As part of this work, McDonough chairs the Rework America Task Force, a national initiative to transform the labor market so that all Americans can thrive in the digital economy. The Task Force is made up of a coalition of diverse, cross-sector leaders working together to define, pilot, and advance policies and practices among employers, educators, policymakers and workers so that all are better equipped to adapt to the rapid pace of technological change. McDonough also serves as an executive fellow at the University of Notre Dame’s Keough School of Global Affairs, teaching a global policy seminar for its inaugural cohort of graduate students.