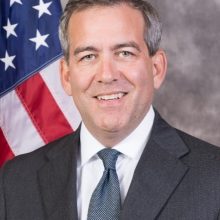 David Bohigian serves as the Executive Vice President of the Overseas Private Investment Corporation after being confirmed by the Senate in August 2017.

Bohigian previously served as an Assistant Secretary of Commerce, focusing on eliminating barriers to trade and investment for US companies. Earlier, Bohigian led the Department’s Policy Office as the lead economic and energy advisor to two Secretaries.