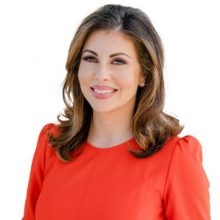 Morgan Ortagus is the Founder of POLARIS National Security. She is an active U.S. Navy Reserve Officer and a business executive. During the Trump Administration, she served at the Department of State as the Spokesperson for the United States of America.

At the State Department, she worked closely with the White House on the historic Abraham Accords that brought the first-ever peace deals between Israel and UAE, Bahrain, and Sudan. Traveling with Secretary of State Mike Pompeo to more than 50 nations, she coordinated messaging campaigns and responses to sensitive and high-profile foreign policy actions, from hostage negotiations to the U.S. campaign against Huawei’s 5G expansion in the West. She led U.S. government efforts to push back against sophisticated Chinese, Russian, and Iranian malign influence campaigns, and was instrumental in the United States’ determination of the Chinese government’s genocide against the Uyghurs.

Morgan graduated with a bachelor’s degree in Political Science from Florida Southern College, and she earned a dual Master of Arts in Government/Master of Business Administration from John Hopkins University in 2013. Morgan and her husband, Jonathan, have a daughter, Adina, who is the light of their lives. They live together in Nashville, Tennessee where Morgan helped found a healthcare investment firm.