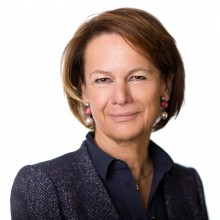 Monique Villa is CEO of the Thomson Reuters Foundation and Founder of TrustLaw and Trust Women. Ethisphere has ranked her among the world’s 100 most influential people in Business Ethics.

Since her appointment in 2008, Ms. Villa has transformed the Foundation, launching a number of programs that leverage the expertise of Thomson Reuters to trigger change and empower people across the world. Among them is TrustLaw, the Foundation’s global pro bono program dedicated to spreading the practice of pro bono. TrustLaw connects the best law firms in the world with NGOs and social enterprises working to create social and environmental change; produces groundbreaking legal research; and offers innovative training courses worldwide. Since its inception, TrustLaw has generated over $70 million in free legal support.

Under Villa’s leadership, the Thomson Reuters Foundation has strengthened its commitment to free and independent journalism. The Foundation’s award-winning editorial team covers issues that mainstream media often overlook, from human rights abuses to the social damage of endemic corruption.

The Foundation also delivers journalism training and media development projects to strengthen media across the globe, and undertakes research into news media through the Reuters Institute for the Study of Journalism at Oxford University.

Prior to joining the Foundation, Villa was Managing Director of Reuters Media and Chairman of Action Images. A French national, she spent the first part of her career at Agence France-Presse (AFP) where she held a number of senior journalistic and management positions.

Monique received the 2015 Champions for Change Award for her vision and effort in the fight against human trafficking and modern-day slavery. Under Villa, the Foundation has received numerous awards, including a Webby Award for Best News Website, a SOPA Award for Excellence in Human Rights Reporting, a Charity Award for Advice, Support, and Advocacy, and a Communicator Award for Excellence.