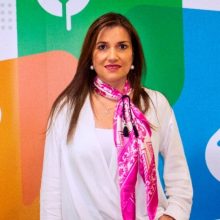 Monica began her career at PepsiCo in 2000 with the acquisition of Margarita, where she had worked as a marketing manager.

After the acquisition, Monica was initially designated as the Trade Marketing Manager. In this position, she collaborated closely with the Latin American region and the Sales team of Mexico to incorporate the best practices that finally led to the creation of the Trade Marketing area.

Subsequently, Monica was appointed sales director for Colombia, being the first woman in Latin America to occupy this position. In this role she gained multi-category experience in sales within the categories of Salty Snacks and Cookies & Crackers, with which he represented the first Greenfield launch outside of Mexico in the region.

In 2010, Mónica was promoted to general manager of Colombia Foods, where she led an important day of transformation to create a new vision, purpose, and role for Colombia. During this time, the country doubled the size of the business and developed a new culture as an integrated team, while working in a pioneer parent organization. With “Expedition 500”, as a brand of transformation and call to action, the Colombian team demonstrated passion, commitment, and outstanding results.

She assumed her current position as general manager of Andinos in January 2013, leading the operations of Colombia, Peru, Ecuador, and Bolivia. In this position, she has been a great ambassador of PepsiCo’s vision of “Performance with Purpose”, supporting the creation of the PepsiCo Foundation in 2013 and leading numerous initiatives to promote the empowerment of women.

Monica is an economist from the Universidad Externado de Colombia and has an MBA from the Universidad de los Andes (Bogotá). During her career, she has participated in the Management Program for Executive Directors at Kellogg School of Management and in the Transformative Business Leadership program at Harvard Business School. Prior to joining PepsiCo, she worked for Parmalat as Commercial Director in Colombia.