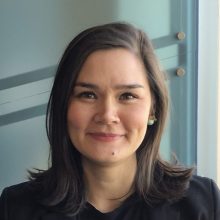 Michelle S. Giuda is the Director of the Krach Institute for Tech Diplomacy at Purdue, the global authority on tech statecraft whose mission is to advance freedom through trusted technology.

Previously, Giuda was Executive Vice President of Geopolitical Strategy & Risk at global communications firm Weber Shandwick, counseling global clients to prepare for and address the impact of geopolitical issues on their business and reputation.

Prior to the State Department, Giuda was Senior Vice President of Global Corporate Communications at Weber Shandwick in New York, serving as a member of the firm’s global leadership team. Previously, she was also Deputy Press Secretary for former Speaker of the House and presidential candidate Newt Gingrich.

Giuda is a Nonresident Senior Fellow at the Atlantic Council’s Freedom and Prosperity Center, a member of Business Executives for National Security (BENS) and a Senior Advisor to Concordia. In 2022, she was named to the Ad Age 40 Under 40 List recognizing those leading change across the marketing industry. Giuda was also honored in 2016 with the Outstanding 50 Asian Americans in Business Award by the Asian American Business Development Center.

Giuda received her Master’s Degree in Political Management from George Washington University and earned a B.A. in Political Science from UCLA where she was an NCAA Champion and Team Captain of the UCLA Women’s Gymnastics Team.