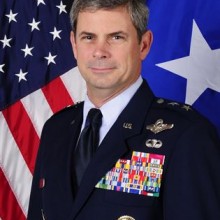 Maj. Gen. Mike Plehn is the Chief of Staff, U.S. Southern Command, Doral,Florida. He is responsible for successfully integrating and synchronizing the efforts of nine directorates and 15 special staff offices in support of the combatant commander’s theater campaign plan. General Plehn graduated from Miami Southridge High School in 1983 and entered the U.S. Air Force Academy Preparatory School. He graduated from the U.S. Air Force Academy with military distinction in 1988 with a degree in astronautical engineering. He is a graduate of the School of Advanced Airpower Studies and the Chief of Staff of the Air Force Fellows program. He has served on the Air Staff and in joint assignments at Headquarters U.S. European Command, the Joint Improvised Explosive Device Defeat Organization, Headquarters U.S. Central Command, and the Office of the Secretary of Defense. General Plehn is a master navigator with more than 2,100 hours, including more than 350 combat hours, primarily as an Electronic Warfare Officer on the AC-130 gunship.

He has flown missions supporting operations over Bosnia, Somalia, Haiti, and Afghanistan, and has commanded special operations units at the squadron, group, and wing levels.