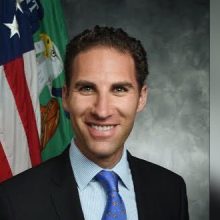 Michael B. Greenwald is a Belfer Center Fellow at Harvard Kennedy School’s Belfer Center for Science and International Affair. His expertise is in illicit finance, sanctions, and the Gulf/Middle East.

Greenwald previously worked in senior roles within the United States Treasury in positions working with Africa, Europe, and serving as a financial diplomat in the Middle East spanning the tenures of U.S. Treasury Secretaries Geithner, Lew and Mnuchin. Most recently, he served as the first United States Treasury Attaché appointed to Qatar and Kuwait and opened the Treasury Department’s office in Doha, Qatar in August 2015. Prior to that role, Greenwald served as the United States Treasury Policy Advisor for Europe. In this role, he was appointed as the head of the United States Delegation to the Committee of Experts on the Evaluation of Anti-Money Laundering Measures and the Financing of Terrorism before the Council of Europe in Strasbourg, France. Greenwald was part of the U.S. Treasury team that crafted U.S. sanctions against Russia, the largest U.S. sanctions program to date, and negotiated similar sanctions by Europe.

He has also served in a variety of roles in the U.S. Intelligence Community and in the Office of General Council at the U.S Treasury working closely with the National Security Council at the White House working on issues related to countering ISIS, Al-Qaeda, Hezbollah, Hamas, Iran, Ukraine/Russia, Syria, and North Korea.

Since leaving the United States Government in July 2017, Greenwald serves as the Senior Vice President of Tiedemann Advisors. He is a senior member of the firm’s business development strategy team. He works closely with clients to understand and help implement their goals and objectives. Greenwald is also the Senior Advisor to the President and CEO of the Atlantic Council, Fred Kempe, and serves as the Special Advisor on International Affairs to the President and CEO of Dana Farber Cancer Institute, Dr. Laurie Glimcher. He is an advisor to Concordia on international finance issues.

Greenwald is an Adjunct Professor at The Pardee School of Global Studies at Boston University where he teaches Global Policy: Countering Terrorist Financing. He also teaches The New Normal of Economic Statecraft in the Middle East.