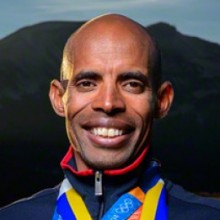 Meb Keflezighi inspired the nation with his iconic 2014 Boston Marathon victory (2:08:37) on year after the devasting finish-line bombing one year prior. He snagged a handfull of top-five finishes in 2015, including second place finishes at both the San Diego Half Marathon (1:02:26) and San Jose Half Marathon (1:03:02) after proving his longevity with a fourth place finish in the Olympic marathon in London, wich came eight years after his Olympic silver medal in 2004. He has become a premier international name in American distance running. In addition to the records and Olympic medal, Keflezighi made history in 2009 by winning the ING New York City Marathon in 2:09:15. The win gave Keflezighi the USA Marathon Championship and his fourth national title of 2009, and he became the first American man to win in New York since Alberto Salazar’s 1982 victory in 2:09:29. He earned a total prize-money payday of $200,000. He also finished atop the USA Running Circuit rankings for 2009. It was his first victory in that event since 2002. His 20 km split of 57:52 became the new American record for that event, bettering Ryan Hall’s 57:54 set in 2006. At the 2004 Olympic Games in Athens, Keflezighi became the first American man since 1976 to win an Olympic medal in the men’s marathon, taking the silver at Panathenaiko Stadium crossing the finish line under a full moon. His medal at Olympic Stadium during the closing ceremonies gave Team USA its 25th medal of the Athens Olympics – at the time the most successful Olympics for Team USA track & field since 1992. His time of 2:09:53 in the 2004 New York City Marathon gave the U.S. its best men’s finish in New York since Bob Kempainen placed second in 1993. Born in Eritrea, Keflezighi (pronounced Ka-FLEZ-gee) and his family moved to San Diego in 1987.

He is one of 11 children and applied for U.S. citizenship in 1997 not knowing if his native country of Eritrea would participate in the 2000 Olympics in Sydney. He lived in a village in Eritrea with no electricity, where his brothers hid in the bushes so they would not be forced to join the military to fight against Ethiopia. He became a U.S. citizen on July 2, 1998. He trains at altitude (7,000 feet) at Mammoth Lakes, Calif. He was an honorary team captain for the Houston Rockets at a home game on February 14, 2003, while in town for the USA Cross Country Championships.

His wife, Yordanis, whom he met at an Eritrean-American soccer tournament in 2004, gave birth to the couple’s first child, Sara, on March 8, 2006. He operates the Meb Foundation, which was built to inspire youth and their families to lead healthy, active and balanced lives and released his book «Run to Overcome.»