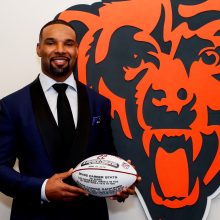 Matt Forte was drafted by the Chicago Bears in the second round of the 2008 NFL Draft (44th overall)  and donned the Navy and Orange through the 2015 season. His rookie season ranks among the most  prolific in franchise history. In 2014, Forte set a single-season NFL running back record after hauling  in 102 receptions. He remains one of three running backs in the history of the NFL to record 100+  receptions in a single season. Collectively as a Bear, Forte was one of the league’s best dual-threat backs in his eight seasons. The  two-time Pro Bowler ranks second of all-time by a Bears running back and 11th overall in the NFL  with his 2,035 rushing attempts and 8,602 rushing yards. His five 1,000-yard rushing seasons, 24 100- yard games and 12,718 total yards also rank second of all-time by a Bears running back, trailing only  Hall of Famer, Walter Payton, in each category. Following two seasons with the New York Jets (2016-17), Forte finalized his illustrious 10-year career  with 9,796 rushing yards and 54 touchdowns on 2,356 attempts. The 554 grabs rank ninth of all-time  by an NFL running back and his 14,468 scrimmage yards are the most by any player during his 10 years  in the league. On April 23, 2018, Forte signed a one-day contract officially retiring a Chicago Bear.

In his retirement, Forte has pursued his long-standing passion for philanthropy. He continues to develop his What’s Your Forte Foundation (founded in 2014), which assists and mentors’ individuals in underserved communities by creating programs that help them realize their passions and in part, “find their forte.” Forte and his foundation champion organizations that promote health, wellness, and education for at risk youth. He has partnered with and advocated for United Way of Chicago, to be one of the faces of  the organization and sat on The Google Org Impact Challenge board rallying local non-profit  organizations to create innovative economic opportunities within their community through grants.

Last year, in response to COVID-19 and the economic impact it had on small businesses, Forte and his  foundation partnered with Chicago Neighborhood Initiatives Micro Finance Group (CNIMFG) to  launch “Your Forte, Our Finance.” The program pledged to invest, grow, and build underserved  communities in the south and west sides of Chicago by providing $3 million in financial contributions, primarily to small black-owned businesses, through a combination of loans, grants and other  educational resources. “Our Chicago communities deserves access to developmental programs,” says Forte. “As the late Nelson  Mandela once said, ‘The youth of today, are the leaders of tomorrow’. So wherever possible, and with  whatever means I have, I will work to equalize opportunity and level the playing field.”