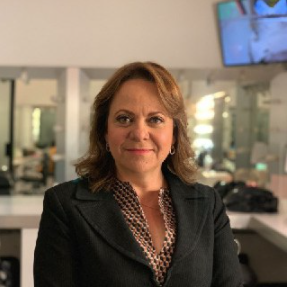 Since December 2018 she has been the head of the Undersecretariat for Multilateral Affairs and Human Rights in the Ministry of Foreign Affairs, where she promotes an agenda with a multilateral and feminist foreign policy. She is in charge of aligning the global strategy to attract investment and to strengthen the economic promotion of Mexico abroad. She also leads the UN Generation Equality Forum and serves as Sherpa for Mexico in the High Level Panel for a Sustainable Ocean Economy.
Representing Mexico, she assumed the presidency of the first Assembly of the United Nations Human Settlements Programme (UN-Habitat) for the period 2019-2023.
During the health emergency caused by COVID-19, and under the instructions of Foreign Minister Marcelo Ebrard, the team led by Undersecretary Delgado has been in charge of procuring medical supplies, opening the Mexico-China air bridge, coordinating global donations, and securing vaccines for our country.
Martha Delgado is a renowned national and international environmentalist. From 2006 to 2012, she was Minister of Environment of the Mexico City, where she led key projects in environmental matters that gave the City world leadership.
Other outstanding activities in her 29-year career are:
• Advisor to the Presidency of the National Institute of Ecology, from 1993 to 1998.
• President of Mexican Citizen Presence AC and the Union of Environmental Groups IAP, from 1998 to 2003.
• Independent Representative in the III Legislature of the Legislative Assembly of Mexico City, from 2003 to 2006.
• She is a contributor in several national and international media.