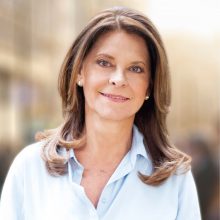 Vice President of the Republic of Colombia

Elected Senator of Colombia in 2006, Ramírez introduced legislative initiatives to permit women to attain the rank of General in the Military Forces of Colombia, and to mandate English teaching in schools. Ramírez was Colombia’s first female Minister of National Defence, serving from 2002 to 2003 in the administration of President Álvaro Uribe Vélez, and the second woman in Latin America to hold this title. She has also served as the 6th Minister of Foreign Trade of Colombia, from 1998 to 2002.

In 2009 she resigned from the Senate to run as a candidate for the 2010 Conservative Party’s presidential nomination, finishing third to the eventual Conservative nominee Noemí Sanín Posada. In 2014, she once again ran for the Conservative nomination, this time winning the nomination, but ultimately finishing third in the first round of the 2014 presidential election. Ramirez is also a member of Washington D.C. based think tank, The Inter-American Dialogue. In 2018, Ramírez became the first woman elected to serve as Vice President of Colombia, running on a ticket with Iván Duque Márquez.