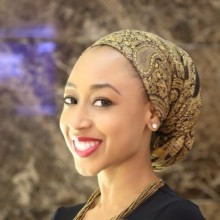 Mariam Yinusa is a Principal Financial Economist at the African Development Bank (AfDB) Group. She is currently responsible for designing and implementing innovative financial instruments to fund strategic, complex and niche programs and projects in the agriculture sector under the AfDB’s Feed Africa Strategy for Agricultural Transformation. She also acts as co-lead of the AfDB’s flagship program promoting youth in agriculture as a means to achieve food security and reduce youth unemployment on the continent. Her previous roles at the AfDB between 2011 and 2016 focused on strategy formulation and policy advisory to national governments and regional institutions in Africa. She also structured, implemented and evaluated the effectiveness of development projects in various sectors including agriculture, energy and human development.

Prior to that Ms. Yinusa worked at the Economic Community for West Africa States (ECOWAS) Commission to set up the West African Electricity Regulatory Authority as an autonomous self-financed regulator of the West African Power Pool. She also worked as a financial analyst as Lotus Capital Limited, an innovative asset management company based in Nigeria.

From 2016 to 2017 Ms. Yinusa served as Technical Adviser to the Executive Secretary of the United Nations Economic Commission for Africa under the Mo Ibrahim Foundation Fellowship Program where she provided policy advice to shape Africa’s socio-economic transformation agenda in priority areas including the promotion of commodity based industrialization, natural resource management, good governance and stemming illicit financial flows

Ms. Yinusa is a fellow at the Observer Research Foundation, a think-tank which provides independent analysis on global economics, development, strategy and security. She serves a Board Member in NigDev Consulting, a non-profit community based organization which works to promote development effective and accountability in Nigeria. She has experience working in more than twenty (20) African countries. Ms. Yinusa holds a Master’s of Science in Financial Economics with distinction from the University of Glasgow, United Kingdom.