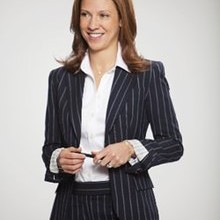 Maria Claudia Lacouture was appointed as Minister of trade, industry and tourism on may 3 rd 2016 by Juan Manuel Santos, president of the Republic of Colombia.

Since the beginning of her career in 1996, as an intern at Proexport (Today ProColombia), María Claudia Lacouture has worked and contributed significantly in improving Colombia’s image abroad. She has been acknowledged for her dedication in obtaining the return of cruise ships to Colombian ports, traveling the world for the country brand campaign with the “Tour of Hearts”, for promoting free trade agreements and attracting foreign investment.

This specialist in Finance and International Relations has always been linked to foreign trade, with a long history in Proexport. At this entity she has held positions including Marketing Analyst, Marketing and Foreign Trade Advisor, Director of Tourism in the United States office, and because of her experience and commitment, she was appointed Vice President of “Imagen Pais” at a crucial time in the change of Colombia’s perception.

She was also a researcher at the Swiss multinational advisor Egon Zehnder International, administrator and coordinator of Internet content for Yupi Internet, and worked as an international trade specialist at Trade Winds Networks in Miami.
In 2010, she took on the challenge of directing the entity in charge of promoting non- traditional exports, attracting foreign direct investment in Colombia and positioning the country as a world class tourist destination, with great results contributing to the development of new routes and flight frequencies, training professionals in the travel industry, and solid promotional strategies with wholesalers as well as airlines in 30 different countries.

Maria Claudia’s commitment with the country has led her to successfully manage a team that in the past two years has generated more than 14,000 opportunities abroad for Colombian businessmen, as well as showcasing the best products and destinations that the country has to offer. She has enhanced ProColombia’s presence around the world, and in Colombian regions to work closer with companies and its businessmen.
She is a true believer in teamwork, which is why she supports public-private alliances that are conducive to raising the competitiveness of suppliers.

Colombian businessmen have applauded her leadership and management, recognizing her as one of the top officials of the national government by way of a survey taken on La Republica newspaper. In May 2015, Fast Company magazine ranked her as the fourth most creative person in the business world (www.fastcompany.com/3043904/most- creative-people-2015/maria-claudia-lacouture) in a list of 100, including representatives from Google, Nike, Pintrest and General Electric, amongst others.
In july 2015, in order to strengthen communication bonds with businessmen from Coombia and abroad, Lacouture launched her blog www.blogdemariaclaudia.com focused on innovation, service and creativity. On october 2015, Merco Colombia 2015 survey presented the “top 100 of best reputation leaders” where Minister Lacouture ranked 40.