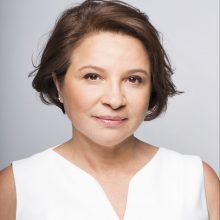 Prior to joining Pro Mujer in 2016, Maria worked with a wide range of business and non-profit organizations across Latin America, U.S.A., Western Europe, and India. Maria co-founded and became managing partner of FIRST Impact Investing, a private equity fund in Brazil. Prior to FIRST, she served as Chief Strategy Officer for Fundación Avina, where she spearheaded strategy and operational initiatives across the organization, spanning 15 countries. Earlier in her career, Maria worked at Dell Inc. where she was closely involved in the company’s expansion into Latin America. She previously served as a management consultant with A. T. Kearney and TPI.

In addition to speaking at leading events, including the Women Deliver, Fortune Conferences, and the World Economic Forum, Maria has authored multiple trade and academic articles. In 2019, she was named among Apolitical’s Gender Equality Top 100: The Most Influential People in Global Policy. She has served on international boards, including the Equality Fund, Aspen Network of Development Entrepreneurs, PYME Capital Fund, and FUNDES. Maria currently serves as Board member on Equality Fund, a consortium of Canadian and international organizations, and since 2017, Maria has served as Co-chair of Partnership for Responsible Financial Inclusion

Maria holds a Master of Business Administration degree from the University of Texas in Austin, a Master of Science in Information Science from Columbia University in New York, and a Bachelor of Arts from Universidade Federal do Ceará in Brazil. She is based in New York City.