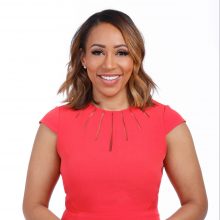 Mara Schiavocampo is a four-time Emmy Award winning TV journalist, cable news commentator, and one of the highest-charting Black podcasters in the United States.

Mara frequently appears on cable news, including CNN, MSNBC, and Peacock, sharing analysis and commentary on news stories and hot topics. Her areas of focus are race, culture, and social justice.

Mara is also the Executive Producer and Host of The Trend Reporter podcast (iHeartMedia – iTunes #1 Fashion and Beauty, iTunes Top 200 overall, 600k+ downloads), making her one of the top Black podcasters in the United States.

Mara recently worked as the Senior Investigative Correspondent for The Dr. Oz Show, covering everything from pressing health and wellness issues, to the big crime and news stories of the day. Mara has worked as Correspondent for Good Morning America and The Today Show, and appeared on The View, The Chew, The Oprah Winfrey Show and more.

Over her 15 year journalism career, Mara has covered many of the biggest news stories of the last decade, most recently as a correspondent for ABC News’ Good Morning America. Prior to ABC News, Mara spent six years as an anchor and correspondent at NBC News and MSNBC. She has also worked as an international contributor and commentator for numerous news outlets and websites, including Current TV, Yahoo!, NPR and more.

The daughter of an African-American mother and Italian father, Mara holds dual Italian-American citizenship, speaks fluent Italian, and can get by in Spanish and French. Mara is an avid traveler, and has lived in Somalia, Italy and the Philippines.

But by far the best part of Mara’s life is as “Mrs. Porter”, a wife, and mom to two rambunctious kids (and one adorable fur baby) in Harlem, New York.