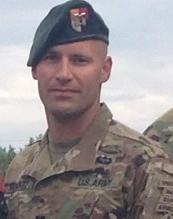 Major Scott Modesitt is a U.S. Army Special Forces officer with deployments to Afghanistan (Operation Enduring Freedom), Northwest Africa and Central Asia. For his service, he has received numerous awards and decorations, including the Bronze Star Medal, Meritorious Service Medal, and the Combat Infantryman Badge. Scott is currently completing his Master of Science in Foreign Service at Georgetown’s Walsh School of Foreign Service and will return to his unit this spring to command a Special Forces company.