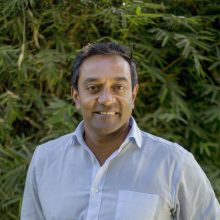 M. Sanjayan is a global conservation scientist whose work spans from genetics to wildlife migration to nature’s impacts on human well-being. He has served as Conservation International’s chief executive officer since 2017.

Sanjayan joined Conservation International in 2014, overseeing its successful $1.1 billion capital campaign and its critically acclaimed brand campaign, “Nature Is Speaking,” along with its push into virtual-reality filmmaking.

Sanjayan holds a master’s degree from the University of Oregon and a doctorate from the University of California-Santa Cruz, and his peer-reviewed scientific work has been published in journals including Science, Nature and Conservation Biology. He is a visiting researcher at UCLA and a distinguished professor of practice at Arizona State University. He is also a Catto Fellow at the Aspen Institute.

Raised in Southeast Asia and West Africa, Sanjayan’s unique background has informed his work and he has attracted widespread media coverage, from The New York Times, Outside Magazine and CNN International. His media appearances include NBC’s “Today Show,” “The Late Show with David Letterman,” “CBS This Morning,” and “CBS Evening News,” and he has hosted more than a dozen documentaries from PBS, BBC, National Geographic, Discovery and Showtime. Most recently, he hosted the University of California and Vox Media’s Climate Lab series, which has garnered over 20 million views.

Sanjayan lives in Washington, D.C., with his wife and daughter. When able, he spends time in Montana fly-fishing, or birding and diving around the world.