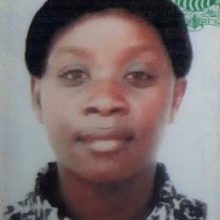 “When I was diagnosed with cervical cancer, I had no idea of how I was going to deal with the situation as I was already living with HIV after testing positive in 2017. It was difficult for me to comprehend and thought I would not survive it. However, when I was asked to undergo treatment, I had trust and hope in our healthcare system that I will be treated”.

Born 29 years ago, Lydia Musonda is a mother of two, and an entrepreneur running a small company that produces security safes, filing cabinets and metal trunks. The company has an annual profit yield of about USD 2000. She was diagnosed with cervical cancer in January 2019.

“When I started experiencing backaches and severe bleeding, I did not know what was happening to me. I had a foul smelling discharge which made me feel isolated socially and I could not sit as comfortably without excruciating pain. A friend of mine who had just graduated from college advised me to go for cervical cancer screening as she suspected that what I was experiencing pointed to some symptoms of cervical cancer that she had learnt about whilst at college in Livingstone.”

Lydia finally made the decsiion to go for cervical cancer screening at the University Teaching Hospital (UTH) in Lusaka. At that time the cervical cancer screening program was being supported by the Centre for Infectious Disease Research In Zambia (CIDRZ) with funding from the U.S President’s Emergency Plan for AIDS Relief (PEPFAR) through the U.S Centers for Disease Control and Prevention (CDC).

After her initial consulation in February 2019, a biopsy was done and the results confirmed that she had cervical cancer. The hospital staff were extremely helful and supportive and facilitated a quick referral to the Cancer Diseases Hospital where other tests were conducted and treatment commenced. The entire process took about 9 weeks.

“During the time I was receiving treatment, my business had incurred losses and I couldn’t meet my salary obligations towards my five workers. Being the sole provider for my mother, two children and four siblings, life became unbearable as I could not provide the basic needs for my family as I used to”.

“The Cervical Cancer Program has helped tremendously. Without it my friend wouldn’t have known about cervical cancer symptoms and pass on the information to me. Many women have been assisted through information dissemination, early diagnosis and treatment. I can no longer feel the pain I felt before treatment, I can now walk long distances and am able to work again”.

“I would encourage every woman to screen for cervical cancer especially those living with HIV at the ealiest opportune time so that treatment could be commenced early once detected”.

With the support from PEPFAR through CDC, the cervical cancer prevention program under CIDRZ, was initiated in 2006 and initially integrated into two (2) Government of the Republic of Zambia (GRZ) health facilities initially meant for women living with HIV. Screening was later extended to include all women that were sexually active regardless of their HIV status, however the focus has remained on HIV infected individuals. The screening program has expanded to over 100 screening centers across the country and has screened over 700 000 women and treated over 50 000 pre-cancerous lesions. It has also referred approximately 20 000 women with large lesions and lesions suspicious of cervical cancer. The program targets screening for women that are living with HIV who, because of their compromised immunity, may have persistent HPV infection and are therefore are 4-5 times more likely to develop cancer of the cervix compared to women that are HIV uninfected. The program continues to build capacity through training and mentorship programs. So far, over 500 nurses and doctors have been trained to provide screening in various GRZ health facilities.