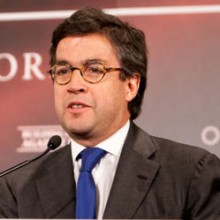 Luis Alberto Moreno assumed the presidency of the Inter-American Development Bank on October 1, 2005. He was re-elected to a five-year term during a special meeting of the Bank’s Board of Governors on July 6, 2010.

Previous to joining the IDB, Moreno served as Colombia’s Ambassador to the United States for seven years. Ambassador Moreno oversaw a dramatic improvement in Colombian-U.S. relations during his tenure in Washington. His most notable achievement was the successful effort to build strong bipartisan support in the United States Congress for passage of more than US$6 billion in U.S. assistance programs for Colombia. These resources have contributed to a material positive transformation of the security and economic situation in Colombia.

Prior to his post as Ambassador, Moreno served a distinguished career in both the public and private sectors in Colombia. Immediately prior to his appointment in Washington, he served as representative for the Andean Region of WestSphere Capital, a private equity firm focusing on investment opportunities in Latin America, from August 1997 to July 1998. Previously, he served as senior advisor to the Luis Carlos Sarmiento Organization, the leading banking & financial group in Colombia with over US$10 billion in assets, from November 1994 to August 1997.

From 1991 to 1994, during the administration of President César Gaviria, Moreno worked in the Colombian Government in a variety of leadership positions. From December 1991 to July 1992, Moreno was the President of the Instituto de Fomento Industrial (IFI), the Colombian government’s industrial finance corporation, and a holding company for many of the largest state enterprises in the country. As head of IFI, Moreno led a successful privatization program and developed new financing instruments for private industry to take advantage of the Gaviria administration’s economic liberalization policy. In July 1992, he was named Minister of Economic Development. During his tenure, he modernized the Ministry and its subordinated agencies, and led the design and implementation of Colombia’s industrial policy and competitiveness strategy. He was also in charge of part of the Government’s social investment portfolio, notably its low-income housing strategy. Upon leaving the Ministry in January 1994, he was tapped to chair Andrés Pastrana’s Presidential Campaign.