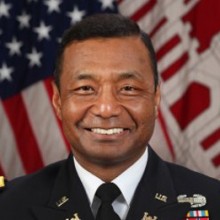 53rd Chief of Engineers of the United States Army and Former Commanding General of the U.S. Army Corps of Engineers

As the USACE Commanding General, he is responsible for more than 37,000 Civilian employees and 600 Military personnel who provide project management and construction support to 250 Army and Air Force installations in more than 100 countries around the world. USACE has a key role in support to Overseas Contingency Operations, with thousands of Civilians and Soldiers having deployed to support reconstruction in Iraq and Afghanistan. Lieutenant General Bostick is also responsible for USACE’s diverse missions such as hundreds of environmental protection projects; regulatory permit program to protect, restore and enhance thousands of acres of wetlands; and emergency response mission to support the Federal Emergency Management Agency in restoration and repair after a disaster, whether natural or manmade. As the Chief of Engineers, Army Staff Principal, the Chief advises the Army on engineering matters and serves as the Army’s topographer and the proponent for real estate and other related engineering programs.

Prior to USACE, Lieutenant General Bostick served as Deputy Chief of Staff, G-1, Personnel, United States Army, responsible for developing, managing, and executing manpower and personnel plans, programs, and policies for the Army.

Lieutenant General Bostick was also an Assistant Professor of Mechanical Engineering at West Point and was a White House Fellow, serving as a special assistant to the Secretary of Veterans Affairs.