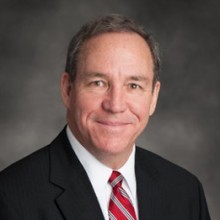 Professor of Practice of Leadership for Arizona State University

Lieutenant General Benjamin C. Freakley serves as the Professor of Practice of Leadership for Arizona State University and as a Special Advisor to ASU President Michael Crow for Leadership Initiatives. Additionally, he serves at The McCain Institute for International Leadership. He recently retired from the U.S. Army after more than 36 years of active military service, and was serving as Commanding General, U.S. Army Accessions Command, at the time of his retirement.

General Freakley was responsible for worldwide recruiting for the Active Duty and Reserve components as well as overseeing the Nation’s Junior and College ROTC programs. As an infantry officer, General Freakley commanded at all levels through division and combined joint task force. His operations assignments began with 24th Infantry Division (Mechanized), Fort Stewart, Georgia in Operations Desert Shield and Desert Storm, Saudi Arabia, first as the Executive officer, 3rd Battalion-7th Infantry then as the S-3 (Operations), 1st Brigade. From March 2003 to June 2003, he served as Assistant Division Commander (Operations), 101st Airborne Division (Air Assault), Operation Iraqi Freedom, Iraq. From 2003 to 2006 he commanded the Army’s largest training institute, the Infantry Center and School at Fort Benning, Georgia. In January 2006, as the Commanding General of the 10th Mountain Division (Light) and Fort Drum he led the division in Afghanistan serving as the Commanding General Combined Joint Task Force-76, Operation Enduring Freedom, Afghanistan, where he served until February 2007.

General Freakley’s awards include the Distinguished Service Medal, Legion of Merit, Bronze Star for Valor and ARCOM for Valor. He is an Eagle Scout and in 2010 was named the Education Policy Leader of the Year for the National Association for State Board Educators. He is married to the former Susan French of Woodstock, VA. They have five sons, four daughter-in-laws and seven grandchildren. Two sons are serving as Infantry Officers.