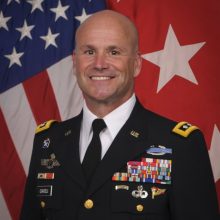 Commissioned into the Infantry in 1987, LTG Cavoli has served in a wide variety of positions throughout the United States, Europe and Asia.

LTG Cavoli’s staff experience includes service as the Director for Russia on the Joint Staff; Deputy Executive Assistant for the Chairman of the Joint Chiefs of Staff; and Director of the Chief of Staff of the Army’s Coordination Group.

LTG Cavoli is a Foreign Area Officer with a concentration on Eurasia, and speaks Italian, Russian and French. He holds degrees from Princeton University and Yale University.

His awards include the Combat Infantryman’s Badge, the Ranger Tab and Master Parachutist’s wings.

He is married and has two children.