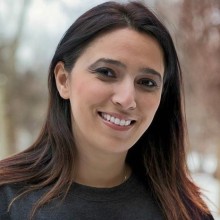 Lina Sergie Attar is the co-founder and CEO of Karam Foundation. She is a Syrian-American architect and writer from Aleppo. She co-developed Karam’s Innovative Education initiatives: the creative therapy and holistic wellness program for displaced Syrian children and the Karam Leadership Program, an entrepreneurship and technology program for displaced Syrian youth. Sergie Attar frequently travels to the Syrian border in southern Turkey to run Karam’s Smart Aid programs. She was named one of GOOD magazine’s 2016 GOOD 100 for Karam’s innovative work with Syrian refugees. Her articles and essays have been published in the NYT, Chicago Tribune, Foreign Policy, Politico, and BBC. She has appeared on CNN, NBC News, BBC News, Huffington Post, NPR and other media outlets. Sergie Attar has spoken about the Syrian humanitarian crisis at schools, universities, and institutions including: RISD, Harvard University, University of Chicago, Loyola, Northwestern, DePaul, Bentley University, Philips Exeter Academy, King’s Academy in Jordan, the Chicago Council on Global Affairs, Tahrir Institute, and others. Sergie Attar is a co-founder of the How Many More? project and serves on the Board of Directors of The Syria Campaign.