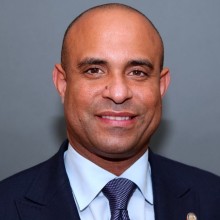 Laurent Salvador Lamothe is one of the politicians and public figures that defines our times. Born in Port-au-Prince, Haiti, he grew up in an academic and artistic—but also athletic environment. A tennis player, Laurent Lamothe represented his country at the Davis Cup in 1994 and 1995. Lamothe is the proud father of two girls, Linka and Lara.

Lamothe successfully served as Prime Minister of Haiti between May 2012 and December 2014, the longest tenure of any Prime Minister in the last three decades. During his time in office, Lamothe presided over the design and implementation of a transformational social policy agenda targeting the poorest sectors of the Haitian population. He also presided over the largest infrastructure development in recent memory that including schools, bridges, roads, is now clearly visible throughout Haiti.

Furthermore, under Lamothe, foreign direct investment increased to its highest level since the fall of the Duvalier dictatorship in the mid 1980s. Under his leadership Haiti pursued reforms that made it a safer and more business-friendly country including 15-year tax holidays and tax breaks to companies investing in the island nation. The police force was increased by 30 percent.

Lamothe brought to the office of Prime Minister an entrepreneurial spirit and dynamism that earned him the title of “Entrepreneur of the Year” by Ernst and Young in May 2008. More recently in November 2014, Latin Trade magazine recognised his innovative skills naming him the year’s Innovative Leader of the Americas. Latin Trade noted that Lamothe “helped establish a paradigm shift for Haiti as a destination for investment, rather than simply for humanitarian aid. “

In 1998 Lamothe founded Global Voice Group SA (GVG) today considered a world-leading provider of ICT solutions for telecoms and fiscal authorities. He served as CEO of GVG until he stepped down to assume his public sector duties with the government of Haiti. GVG has helped governments of emerging countries raise over USD 1 billion for development initiatives and is operational in 10 emerging countries.

In July 2015, Lamothe established LSL World Initiative (LSL), a global organisation specialising in innovative financing for development (IFD) and dedicated to the socio-economic empowerment of emerging countries. LSL does this by assisting these governments to find new revenue streams for socio-economic development. Micro-contributions are levied in global sectors such as telecommunications and financial transactions and when these are aggregated—result in significant revenue. This transformational financing mechanism focuses on domestic resources and is totally controlled by the respective government.

The revenue generated can be applied as a direct response to its national priority development needs. This revenue-raising mechanism is ideal for emerging countries as
it does not rely on donor funding or incur any additional debt.

After leaving office in Haiti, Lamothe has continued to work towards making Haiti an independent and self-sufficient country. The affection the Haitian people have for him as a well-known and respected public figure is evident.

In December 2015, Lamothe founded the Louis G Lamothe Foundation in honour and memory of his father Louis G Lamothe. The Foundation focuses on inclusive social entrepreneurship and a Think Tank wilI focus on the strategies that will lead Haiti towards emerging country status by 2041. Two recent sustainable development projects which will be implemented through the Foundation are the Smart Villages initiative: to provide off-grid communities with sustainable energy and the Nan Pangnol sustainable agriculture project.