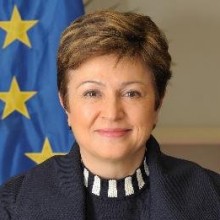 Kristalina Georgieva is the Chief Executive Officer of the World Bank.

As the CEO for the International Bank for Reconstruction and Development and the International Development Association, the World Bank’s lending arms for middle-income and poor countries, Georgieva will build support across the international community to help mobilize resources and develop more effective solutions for the poor at the scale required.

Previously, Georgieva, a Bulgarian national, helped shape the agenda of the European Union since 2010, first as Commissioner for International Cooperation, Humanitarian Aid and Crisis Response, where she managed one of the world’s largest humanitarian aid budget and established herself as a global champion for resilience.

As the European Commission Vice President for Budget and Human Resources, Georgieva was in charge of the European Union’s €161 billion (US $175bn) budget and 33,000 staff across its institutions around the world. She tripled funding available to the refugee crisis in Europe and drove rapid progress towards achieving a target of 40 percent women in management by 2019 in order to improve the Commission’s gender balance.

Georgieva is widely respected for her efforts to mobilize the international community to find innovative solutions to today’s complex challenges. As the co-chair of the United Nations Secretary-General’s High-Level Panel on Humanitarian Financing, she secured the adoption of a much more effective system to meet the needs of record numbers of vulnerable people.

Before joining the European Commission, Georgieva held multiple positions at the World Bank. In her most recent role as the Vice President and Corporate Secretary (2008-2010), she was the interlocutor between the World Bank Group’s senior management, its Board of Directors and its shareholder countries. In the wake of the 2008 international financial crisis, she played a key role in the World Bank’s governance reform and accompanying capital increase.

From 2007 to 2008, Georgieva was Director for Sustainable Development in charge of policy and lending operations in infrastructure, urban development, agriculture, environment and social development, including support to fragile and conflict-affected countries. In this role she oversaw around 60% of lending operations of the World Bank Group.

Deeply knowledgeable in international development and finance, Georgieva established a well-deserved reputation during her time at the Bank for her ability to build broad consensus and turn strategies into practice. She has more than 100 publications on environmental and economic policy topics, including a textbook on microeconomics.

Kristalina Georgieva was born in Sofia, Bulgaria, in 1953.  She holds a Ph.D in Economic Science and a M.A. in Political Economy and Sociology from the University of National and World Economy, Sofia, where she was an Associate Professor between 1977 and 1991.