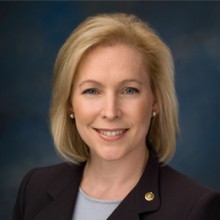 Born and raised in upstate New York, Senator Gillibrand’s home is in Brunswick, New York, with her husband, Jonathan Gillibrand, and their two young sons, twelve-year-old Theodore and seven-year-old Henry.

Throughout her time in Congress, Senator Gillibrand has been committed to open and honest government. When she was first elected, she pledged to bring unprecedented transparency and access to her post. She became the first Member of Congress to post her official public schedule, personal financial disclosure, and federal earmark requests online.

Senator Gillibrand’s number one priority in the U.S. Senate is to rebuild the American economy, by creating good-paying jobs, helping small businesses get loans, and partnering with the private sector to foster innovation and entrepreneurship. She wrote new legislation to strengthen and retool New York’s manufacturers, stamp more products with the words “Made in America,” and create new manufacturing jobs in New York.

Throughout her time in the Senate, Senator Gillibrand has led on a range of issues, from the fight to repeal the «Don’t Ask Don’t Tell» that banned gays from serving openly in the military, to passage of the STOCK Act, to finally make it illegal for members of Congress to financially benefit from inside information, to the long fight to provide permanent health care and compensation to the 9/11 first responders and community survivors who are sick with diseases caused by the toxins at Ground Zero. Senator Gillibrand worked to bring Democrats and Republicans together to win these legislative victories.

From her seat on the Senate Armed Services Committee, Gillibrand has been a vocal advocate for strengthening America’s armed services, national security and military readiness. In 2013, as chair of the sub-committee on personnel, she held the first Senate hearing on the issue of sexual assault in the military in almost a decade. Gillibrand went on to lead the fight in reforming how the military handles sexual assault cases, building a broad bipartisan coalition of 55 Senators in support of legislation to remove sexual assault cases from the chain of command.

Senator Gillibrand is also leading the fight to end the sexual assault epidemic on our college campuses. Along with Senator Claire McCaskill, Kirsten has won the support of a broad bipartisan group of Senate co-sponsors for the Campus Accountability and Safety Act designed to hold colleges accountable and to flip the incentives so that colleges no longer sweep sexual assaults under the rug.

As the mother of two young children, Senator Gillibrand knows that working families are struggling in this difficult economy and has a legislative agenda that puts middle class and working families first. As a champion for the economic empowerment of women & working families, Senator Gillibrand has proposed her Opportunity Agenda to re-write the rules of the workplace to ensure that every working woman has the ability to remain in the workforce and earn her full economic potential. This agenda includes providing paid family & medical leave, raising the minimum wage, making quality child care affordable, creating universal pre-K, and ensuring equal pay for equal work. Gillibrand’s FAMILY Act would create a national paid leave program for all workers for less than the cost of a cup of coffee a week per employee.

After winning 58 votes for her gun trafficking legislation in 2013, coming just two votes shy of overcoming a filibuster, Senator Gillibrand introduced the Hadiya Pendleton and Nyasia Pryear-Yard Gun Trafficking and Crime Prevention Act with Senator Mark Kirk in 2015. This legislation would finally make gun trafficking a federal crime and give law enforcement the tools it needs to stop the flow of illegal guns into our communities. Also in 2015, Senator Gillibrand introduced the CARERS Act with Senators Cory Booker and Rand Paul to reclassify marijuana as a Schedule 2 drug and enable our families to access critical treatment in states where medical marijuana is legal.

As the first New York Senator to sit on the Agriculture Committee in nearly 40 years, Senator Gillibrand is giving New York families the seat at the table they deserve. She worked hard to strengthen the 2012 Farm Bill for New York by strengthening specialty crops, expanding rural broadband and improving recovery efforts from natural disasters. She also led the unsuccessful fight to stop billions in devastating cuts to nutritional assistance for struggling children, seniors and veterans.

From her seat on the Aging Committee, Senator Gillibrand is committed to fighting on behalf of seniors, working to lower the cost of prescription drugs, make long-term care more affordable so seniors can remain independent for as long as they are able, and protect seniors from financial fraud. Senator Gillibrand is fighting to ensure that drug information provided to seniors and all consumers is clear, concise and up-to-date.

After working as an attorney in New York City for more than a decade, Senator Gillibrand served as Special Counsel to United States Secretary of Housing and Urban Development (HUD) Andrew Cuomo during the Clinton Administration. She then worked as an attorney in Upstate New York before becoming a member of Congress.