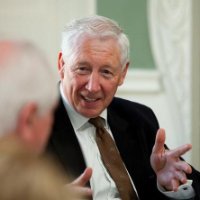 Mr. Aikens is Founder of Diaspora Matters. For 5 years, he was the Sydney-based representative of the Irish Trade Board and the Industrial Development Authority (IDA) of Ireland. He founded the Lansdowne Club in Sydney which has become one of the largest Irish business networks in the world. He was a Founding Director of the Australian Ireland Fund and served as Executive Director responsible for the growth of the fund in Australia and New Zealand.

In January 1993, Kingsley moved to Boston to take over as Executive Director of the American Ireland Fund. In 1995, he was appointed Chief Executive of the Worldwide Ireland Funds active in 39 cities in 13 countries. In 2008, Kingsley was awarded a CBE for his work on British-Irish Relations.