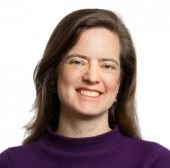 Kimberly Weisul is an award-winning writer, editor, and all-around media pro, speaking frequently on entrepreneurship and women and business.

Weisul is currently the Editor-at-Large for Inc magazine and Inc.com., where she writes regularly on entrepreneurship, women, and technology. She is a frequent speaker and moderator, both at the Inc5000 and other industry events.

Weisul is the creator of the Fundery, the only searchable database of venture funds that have a mandate to invest in women. She is in the process of expanding the Fundery to include other under-represented founders and angel networks.

Weisul was a member of the U.S. delegation to the Global Entrepreneurship Summit in Hyderabad, India, in 2017. In 2013, the U.S. Department of State selected and sponsored her for an eight-day speaking tour of Belgium and the Netherlands.

Before joining Inc., Weisul was a senior editor at a BusinessWeek, where she directed all coverage of small business and entrepreneurship and was the founding editor of a spin-off publication, BusinessWeek SmallBiz. She hired a fantastic team and won a slew of awards.

Weisul has also covered both finance and technology, for Dow-Jones and Ziff Davis. She has worked as a photo assistant for both National Geographic and commercial photographers.