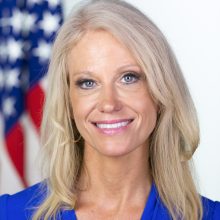 Kellyanne Conway serves in the Trump Administration as an Assistant to the President and Senior Counselor. She works on several key initiatives at the White House including the opioid epidemic, military spouses, hunger and education.
Ms. Conway served as the campaign manager for President Donald Trump. She is the first female campaign manager to run a successful presidential campaign.

Previously, Ms. Conway held roles as campaign manager and strategist. She is the former president and CEO of The Polling Company, Inc./WomenTrend, which provided advice to
corporate brands about reaching female demographics and working with several elected officials to ensure women’s voices were heard. She is the co-author of What Women Really Want: How American Women Are Quietly Erasing Political, Racial, Class, and Religious Lines to Change the Way We Live (2005).

She earned a B.A. in political science from Trinity College in Washington, D.C. and a J.D. from George Washington University Law School. She served as a judicial clerk for Judge Richard A. Levie of the Superior Court of the District of Columbia. She and her husband, have four children.