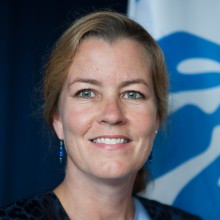 Clements has been closely involved with refugee and displacement issues throughout her three decade career.

Before joining UNHCR, Clements served as Deputy Assistant Secretary of State in the Bureau of Population, Refugees, and Migration (PRM) where she was responsible for humanitarian issues in Asia and the Middle East and global policies and resources. In 2014, she was Acting Deputy Chief of Mission at the U.S. Embassy in Beirut, Lebanon.

From 1993 to 1996, Clements served at the U.S. Permanent Mission to the United Nations in Geneva, Switzerland on a Foreign Service appointment. She was Special Assistant to the Under Secretary of State for Global Affairs in 1997-1998. Clements served as a Senior Emergency Officer for Europe, the Newly Independent States, and the Americas, and later as Balkans Assistance Coordinator; she was deployed to Albania in 1999. She worked for the Office of the UN High Commissioner for Refugees in Bangladesh in 1992.

Clements holds a B.A. in International Studies and an M.A. in Urban Affairs from Virginia Tech, USA. She is a national of the United States of America.