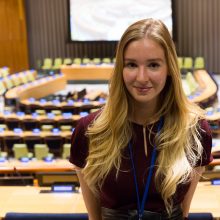 Originally from Latvia, I am a Political Science and Economics student at New York University Abu Dhabi in United Arab Emirates. My curiosity lies in the fields of economic development, climate action as well as the role of the nexus between government and business within and among nation-states, especially amid partners of the Belt and Road Initiative. In the path of pursuing these interests I have traveled to and lived in around five countries in the timespan of past six months, gaining real-time exposure to local governmental structures, business operations, and cultural customs. Following a recent engagement in an academic semester in Shanghai, China, I am now undertaking a semester at New York University in New York. Additionally, I am currently a part of the Permanent Mission of the Republic of Latvia to the United Nations with the role of advisory intern, whereby gathering insight and directly participating in the affairs at the United Nations Headquarters.