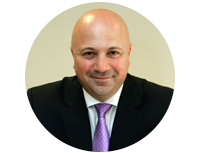 Kaan Terzioğlu was appointed Turkcell’s Chief Executive Officer on April 1 2015. He began his professional life in 1990 as an Independent Auditor and CPA at Arthur Andersen Turkey. In 1992, Mr. Terzioğlu joined Arthur Andersen USA as the IT Strategies and Security Specialist, and in 1994, began working at Arthur Andersen Belgium as the Leader of Information Management and Digital Strategy Services. In 1998, he was appointed Vice President of Consultancy Services Turkey Operations. Between 1999 and 2012, he served as the Team Leader of E-Commerce Strategies for the EMEA region, Sales Director of Advanced Technologies for the EMEA region, Managing Director of Technology Marketing Organization for the EMEA region, and Vice President of Central and Eastern Europe at the Cisco Systems Brussels branch, respectively. Between April 3, 2012 and April 1 2015, Mr. Terzioğlu was a Member of the Board of Directors at Akbank, Aksigorta A.Ş., Teknosa İç ve Dış Ticaret A.Ş. and Carrefoursa A.Ş. Kaan Terzioğlu graduated from the Department of Business Administration at Boğaziçi University.