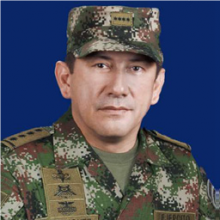 Commander General of the Military Forces, Republic of Colombia

General Rodriguez was born on February 8 1959 in La Mesa (Cundinamarca-Colombia). He is married to Elsa Patricia Calderón Carmona, a practicing lawyer, and they have two girls Natalia and Tatiana. In 1977, General Rodriguez enrolled in the Colombian Military School of Cadets and he has been serving Colombia ever since. He is Civil Engineer from the Military Engineers School specialized in Projects Management from “Escuela Superior de Administración Pública”. General Rodriguez has two masters one in Security and National Defence from the Colombian War School and the second in Senior Management from “Universidad de la Sabana”.

During his military career Gr Rodriguez has completed different military training and courses, such as, Lancero Instructor, Expert Paratrooper, Special Forces, Earth Command, Ranger, Jumpmaster and Explorer. Likewise, he has had specialized training in Military Bridges, Explosives and Demolitions, the Command and General Staff Courses in Colombia at the United States. He made the rank of General with the Course of Advanced Military Studies in the Colombian War College in 2006.

General Rodriguez has commanded at every level in the Colombian military: