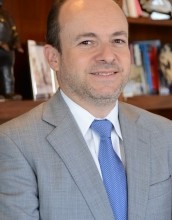 Juan Pablo Bonilla, is the Manager of the IDB’s Climate Change and Sustainable Development Sector (CSD). Previously, he was Chief of Staff to the Executive Vice President of the Inter-American Development Bank.

Dr. Bonilla has worked on environmental sustainability, climate change and energy for more than 20 years. He led the IDB’s Sustainable Energy and Climate Change Initiative, a major strategic step for integrating climate change and sustainability as a priority for the Bank. Before joining the IDB, Dr. Bonilla worked as Senior Specialist at the World Bank, and was a member of the United Nation’s CDM Executive Board.

In Colombia, after serving as the Executive Director of a new think tank Fundesarrollo, and as National Environmental Manager of ANDI, Dr. Bonilla launched new initiatives such as the National Climate Change Policy and the National Biotechnology Policy as principal advisor to the country’s Vice President. Dr. Bonilla served as Deputy Minister of Environment, and acting Minister of Environment, Housing and Territorial Development.

Dr. Bonilla obtained a B.A. in Civil Engineering from the Universidad Javeriana in Bogotá, Colombia, and then received a M.Sc. in Engineering Management and Systems Engineering and a Ph.D. in Environmental and Energy Management from George Washington University.