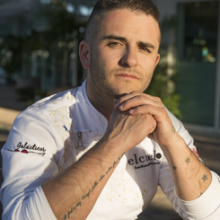 Juan Manuel Barrientos is a Colombian chef, businessman, and advocate for peace, and has been named one of the 50 best chefs of Latin America. He is the founder of El Cielo Restaurant, and was awarded the Revelation Chef Award by Madrid Fusion. His company has been praised and studied by some of the best universities in the world. Juan Manuel has revolutionized traditional Colombian cuisine by combining innovative cooking practices with his passion for neurosciences. He was recognized by the Colombian government as a “Young Leader of Peace in Latin America.”

Juan Manuel has taken his cuisine to major conflict areas in Colombia, and has offered his experience and help to wounded soldiers and young guerrillas. Through his cooking, Juan Manuel has been able to start a process of forgiveness and reconciliation. Thanks to his dedication to the community, Juan Manuel is one of Latin America’s most important peace leaders. He created a new project, which loosely translates to “In El Cielo, We Are Cooking Up Peace in Colombia” (“En El Cielo estamos Cocinando La Paz de Colombia”).