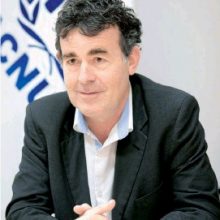 On October 20, 2016, he presented credentials as Representative of the United Nations High Commissioner for Refugees in Colombia.