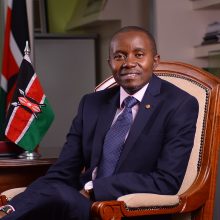 Mr. Joe Mucheru was appointed Cabinet Secretary by His Exellency the President Uhuru Kenyatta in 2015. He was formerly the Google “Sub-Saharan Africa  ambassador” as well as Google Country Manager Kenya, based in Nairobi. He joined Google in June 2007 where he lead the delivery of strategy, business planning and operations. Before joining Google, he worked at Wananchi Online, a company he co-founded in 1999. He held various roles at the company including Strategy & Business Director and CEO. He studied at London’s City University and also attended Stanford University’s Executive Program in 2008.