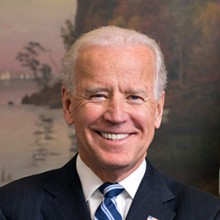 Former Vice President of the United States of America

Joseph Robinette Biden, Jr., represented Delaware for 36 years in the U.S. Senate before becoming the 47th Vice President of the United States.

Joseph Robinette Biden, Jr., was born November 20, 1942, in Scranton, Pennsylvania, the first of four siblings. In 1953, the Biden family moved from Pennsylvania to Claymont, Delaware. He graduated from the University of Delaware and Syracuse Law School and served on the New Castle County Council. Then, at age 29, he became one of the youngest people ever elected to the United States Senate.

Just weeks after the election, tragedy struck the Biden family when then Senator-elect Biden’s wife, Neilia, and their one-year-old daughter, Naomi, died and his 2 sons were injured in an auto accident. Vice President Biden was sworn into the U.S. Senate at his sons’ hospital bedside and began commuting to Washington every day by train, a practice he maintained throughout his career in the Senate.

In 1977, Vice President Biden married Jill Jacobs. Jill Biden, who holds a Doctorate in Education, is a life-long educator and currently teaches at a community college in Northern Virginia. The Vice President’s son, Beau, was Delaware’s Attorney General from 2007-2015 and a Major in the 261st Signal Brigade of the Delaware National Guard. He was deployed to Iraq in 2008-2009. Beau passed away in 2015 after battling brain cancer with the same integrity, courage, and strength he demonstrated every day of his life. The Vice President’s second son, Hunter, is an attorney who manages a private equity firm in Washington, D.C. His daughter Ashley is a social worker and Executive Director of the Delaware Center for Justice. Vice President Biden has five grandchildren: Naomi, Finnegan, Roberta Mabel (“Maisy”), Natalie, and Robert Hunter.

As a Senator from Delaware for 36 years, Vice President Biden established himself as a leader in facing some of our nation’s most important domestic and international challenges. As Chairman or Ranking Member of the Senate Judiciary Committee for 17 years, then-Senator Biden was widely recognized for his work on criminal justice issues, including the landmark 1994 Crime Act and the Violence Against Women Act. As Chairman or Ranking Member of the Senate Foreign Relations Committee for 12 years, then-Senator Biden played a pivotal role in shaping U.S. foreign policy. He has been at the forefront of issues and legislation related to terrorism, weapons of mass destruction, post-Cold War Europe, the Middle East, and Southwest Asia.

As the 47th Vice President of the United States, Joe Biden continued his leadership on important issues facing the nation and represented America abroad, traveling over 1.2 million miles to more than 50 countries. Vice President Biden convened sessions of the President’s Cabinet, led interagency efforts, and worked with Congress in his fight to raise the living standards of middle class Americans, reduce gun violence, address violence against women, and end cancer as we know it. Since leaving the White House in January, Vice President Biden continues his legacy of expanding opportunity for all, both in the United States and abroad, with the creation of the Biden Foundation, the Biden Cancer Initiative, the Penn Biden Center for Diplomacy and Global Engagement at the University of Pennsylvania, and the Biden Institute at the University of Delaware. Through these non-profit organizations, Vice President Biden and Dr. Biden will develop programs designed to advance smart policies, convene experts and world leaders on the issues they care most about, and impact the national debate about how America can continue to lead in the 21st century. In addition, early this summer, Vice President Biden announced the formation of his political action committee, “American Possibilities,” which will allow him to continue to support Democratic candidates and causes across the country.