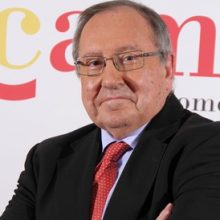 José Luis Bonet
President of the Chamber of Commerce of Spain

Born in Barcelona in 1941, in José Luis Bonet two apparently different worlds converge, but he has not only managed to combine, but has made them complementary: the academic and business world.

At the same time, in the business world, since his appointment in 1966 as commercial director of the Freixenet company, José Luis Bonet has directly participated in the growth and expansion of this family business until reaching the presidency of the group in 1999. Currently holds the honorary presidency of the Group.

Convinced that internationalization is still a pending issue of the Spanish economy and business, Bonet has been at the forefront of several organizations, whose purpose is to help and raise awareness about the importance of increasing the presence of Spanish brands in foreign markets.

He has chaired for 14 years, from 2004 to 2018, the Board of Directors of the Fira Internacional de Barcelona. And he is honorary president of the Leading Brands of Spain Forum, after occupying his presidency for 16 years.
Since November 2014 he is president of the Chamber of Commerce of Spain, a public law corporation whose purpose is the representation, promotion and defense of the general interests of companies. It is integrated by the most representative entities of the economic-business life of the country: large companies, national and international chambers of commerce, business and autonomous organizations, and the Administration.